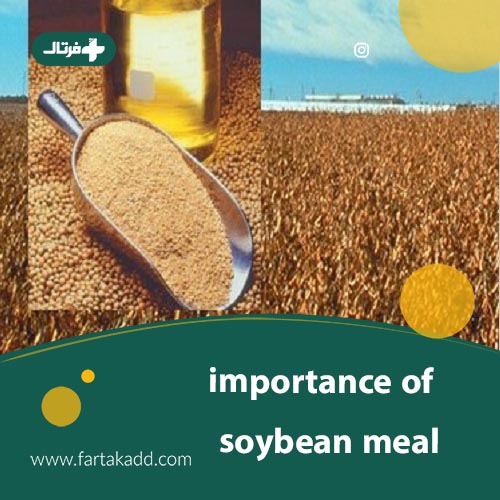 What is the importance of soybean meal?

The use of soy in animal feed has been increasing in recent decades. Of the total soybeans produced worldwide, more than 90% is produced directly for livestock consumption. According to the US Department of Agriculture, soybean production was reported at 165 million tonnes in 2000, compared to an estimated 182 million tonnes in 2011, accounting for approximately 69% of protein-supplied meal. .

Therefore, soybean meal is of special importance among the 700 million tons of feed produced for livestock consumption worldwide as the main source of protein supply. On the other hand, due to the high value of protein sources, especially soybean meal, which is the highest quality source of conventional protein among plant sources, the importance of recognizing this product in animal and poultry nutrition is doubled.

Soybean meal is claimed to be the most important feed used in livestock and poultry feed.

What is soybean meal?

Soybean is a plant from the genus Legumes, which is a hardy, leafy shrub. In fact, soybean meal is a by-product of oil extraction from soybeans, sometimes called soybeans.

The reason for the importance of soybean meal in poultry nutrition is the high protein requirement of this bird and the importance of its quality. Soybean meal is important compared to other sources due to its high protein content (between 42% and 52%), low fiber and low anti-nutritional factors, so that no definite and suitable alternative has been found for this feed so far.

Soybean meal has the highest amino acid content of lysine, which in turn reduces the need for dietary protein. On the other hand, the quality and amount of digestible protein of soybean meal can vary depending on the quality, climate, cultivation and fertilization and soybean seed cultivation, as well as the steps taken in the lubrication process. This extraction is done in different ways, each of which results in a different product.

To extract oil from soybeans, two methods are used mechanically (under pressure) and solvent (hexane). In the mechanical method, soybeans are crushed and the oil is removed under high pressure. This method is safe in terms of environment and animal health, but in case of excessive increase in pressure and subsequent temperature in the production process, there is a possibility of Millard reaction, which reduces the digestibility of protein and nutrients in the bird. Be. In the lubrication method using solvent, first the oil grain is crushed and then the oil is removed by hexane solvent.

In the next step, hexane is recovered and removed from the product. In this method, due to the increase in lubrication efficiency, the amount of fat is reduced and the percentage of protein is higher. But the problem is the presence of hexane residues that can pose health risks to livestock and humans.

On the other hand, soybean husk may be removed before the lubrication process, which affects the amount of fiber in the resulting soybean meal. Table 1 shows the evaluation of soy protein in different countries according to data published in 2001.

Soybean meal has the highest amino acid content of lysine, which in turn reduces the need for dietary protein.